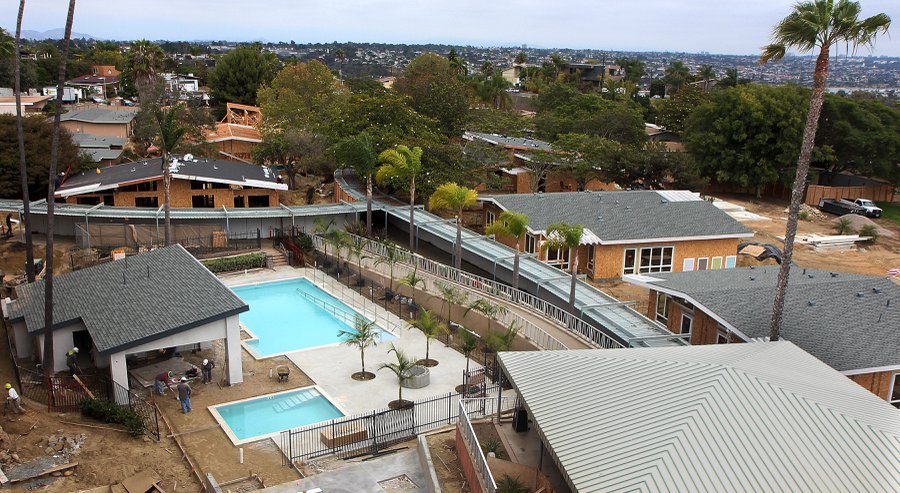 When Wesley Palms opened on the western slopes of Mt. Soledad in April 1962, it was heralded as one of San Diego’s new wave of retirement communities.

“As yet, the exact role of retirement housing in the future is somewhat uncertain,” wrote The San Diego Union’s real estate and building editor, Clyde V. Smith. “It is still tentative, even experimental. But the plans are big, the proposals ambitious, the beginnings auspicious.”

Now more than 50 years later, Wesley Palms’ original $5 million Pacific Beach campus is getting a $68 million makeover, every bit as big and ambitious.

The work is expected to be completed in 2020, resulting in 311 apartments and patio-home units, an 18-unit increase.

“I think it’s going to be wonderful for the next generation,” said Claire Steinberger, 99, who lived with her now-deceased husband for 48 years in Point Loma before moving to Wesley Palms in 1997. A U.S. Customs seizure officer for 23 years, her favorite career line is, “At one time, I had 3 tons of marijuana in my custody.”

She was the first resident to move out of a cottage she has occupied for the past 18 years and into the main building, where she plans to stay.

“At my age, they picked the right place for me,” she said.

“We say each Front Porch community is unique and different,” said Lee Ratta, senior vice president. “It is as unique as the people who live there.”

The original cottages, as small as 435 square feet, had tiny bathrooms, kitchens and limited closet and storage space.

An earlier redevelopment plan called for the entire property, except the main building, to be demolished and rebuilt all at once. Coastal height rules preclude exceeding the 30-foot limit. But officials decided to phase construction over the next five years so that the residents could remain in place and relocate elsewhere on the grounds as needed.

“It’s quite a project,” said Paul Buck, 87, who just moved a year ago from another retirement home in Tucson, Ariz., to be closer to his son Craig and his family. “I’ve done some of this before I retired and have had projects that are pretty involved. I’ve been amazed at how they’ve handle this.”

On a tour of the grounds, Executive Director Ben Geske drove a golf cart on tree lined lanes, past the rose garden and shuffleboard court, up a steep hill to cottages with spectacular views of Mission Bay.

“I’ve had people move to be near their family,” Geske said.

Others were retired military. And of course, many came for the weather. Originally from Wisconsin, Geske moved in 2007, just as master planning began.

Taking advantage of the city’s original conditional use permit issued in the 1950s, Front Porch applied for a substantial conformance permit that allowed for reconstruction but no major change to the layout and density.

Coincidentally, architect Paluso, 36, is a fan of mid-century modern architecture, a style many of the present Wesley Palms generation welcomed when they bought their first homes following World War II. And so some of that esthetic — indoor/outdoor living, clean lines, efficient floor plans and lots of glass to let in natural light — is being retained in the new, larger patio homes.

“This is a design esthetic that is also echoed in the surrounding neighborhoods of Mt. Soledad,” Paluso said. “We said let’s embrace that, let’s celebrate the mid-century feel, and when we do these renovations, let’s make these like they were from that era.”

The newest patio homes have been framed and already exhibit some of that 50-year-old home-design approach. The ceilings are taller, the kitchens, bathrooms and bedrooms larger and there are both front and back patios.

All new utility lines are being installed. Universal design concepts dictate the layout and arrangement of fixtures, such as accessible showers for people in wheelchairs and microwaves in low-height drawers. Low-energy-using lighting, appliances and fixtures will be used throughout. And Internet-savvy seniors will have access to free WiFi and built-in Internet and cable TV connections.

Wesley Palms, by virtue of its name, has lots of palm trees and other specimens that added up to an “urban forest” of more than 500 trees, some planted by residents haphazardly over the years.

Most of the lawns will be removed and where turf remains, a low-water-using buffalo grass and Molate native fescue will be used instead. Shrubs and other plants will include lantana and succulents. The rose garden will remain.

“The intention was so important to Wesley Palms — that this is ‘gardenesque,’” Reed said. “These people are living out the sunset and autumn of their lives. It’s beautiful and lawns are part of that. They drink too much water but that’s what makes Wesley Palms what it is. It needs to be beautiful.”

Wesley Palms at a glance

We recognize the importance of being involved in the communities we work and live in.

Learn more about what we’re doing to give back to the places we call home.

Through the application of practical experience and common sense thought, we offer our Clients and Consultants the opportunity to partner with our team, and manage the process with the perspective of the Owner with a stake in the project.

California’s six indicators for modifying the…